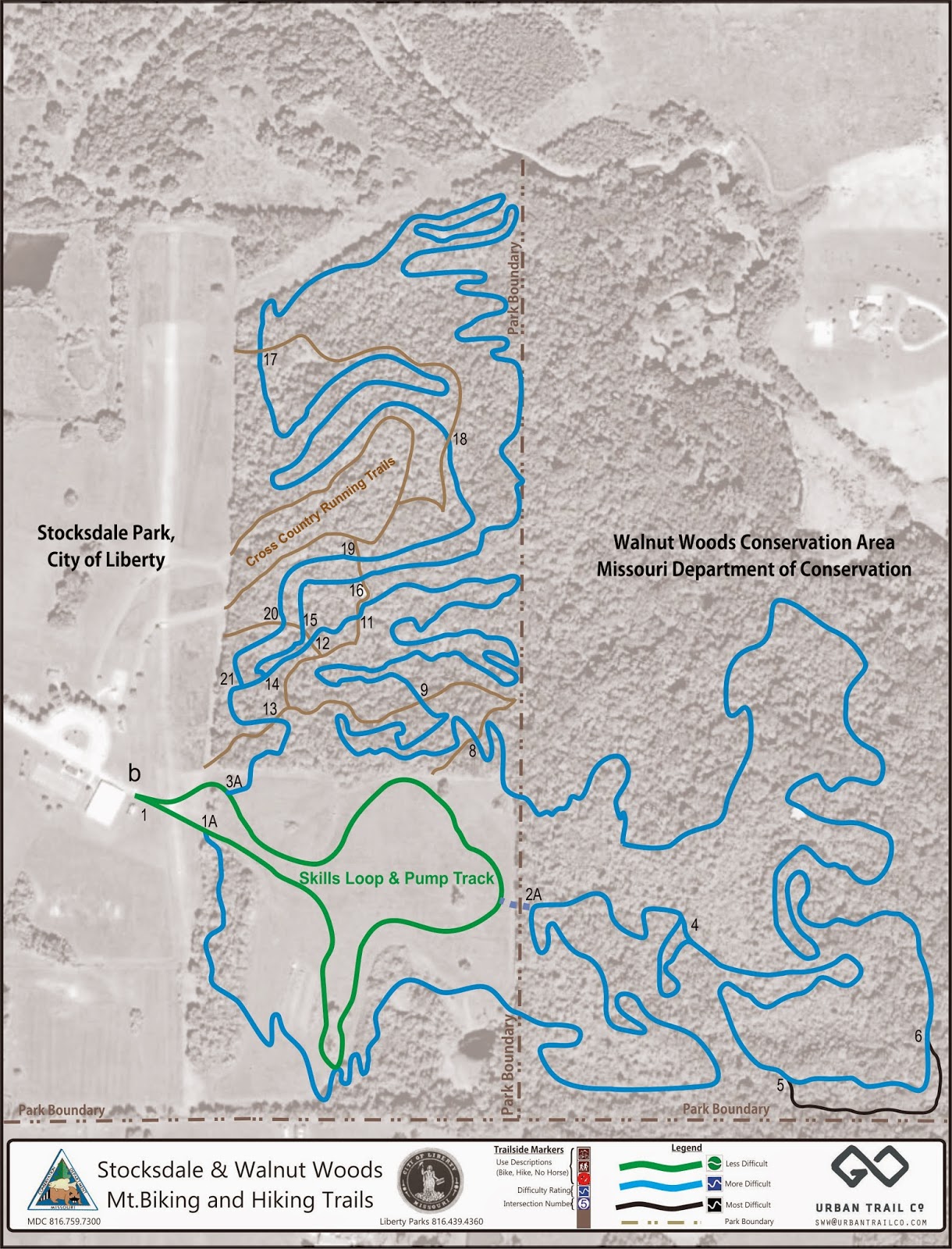 Click on map for larger view.
Posted by Unknown at 1:55 PM 4 comments:

Well, the city wants a pump track at Stocksdale and we are happy to oblige.  Clay is the man with the plan for this.  The city has plenty of dirt to provide and Adam Morse has a Bobcat and skills.

Clay's hope is to have the first phase of the pump track done for the June Earthriders meeting.  So come on out and enjoy pulled pork sandwiches provided by Biscari Brothers bike shop and warm up on the pump track before hitting the trails. 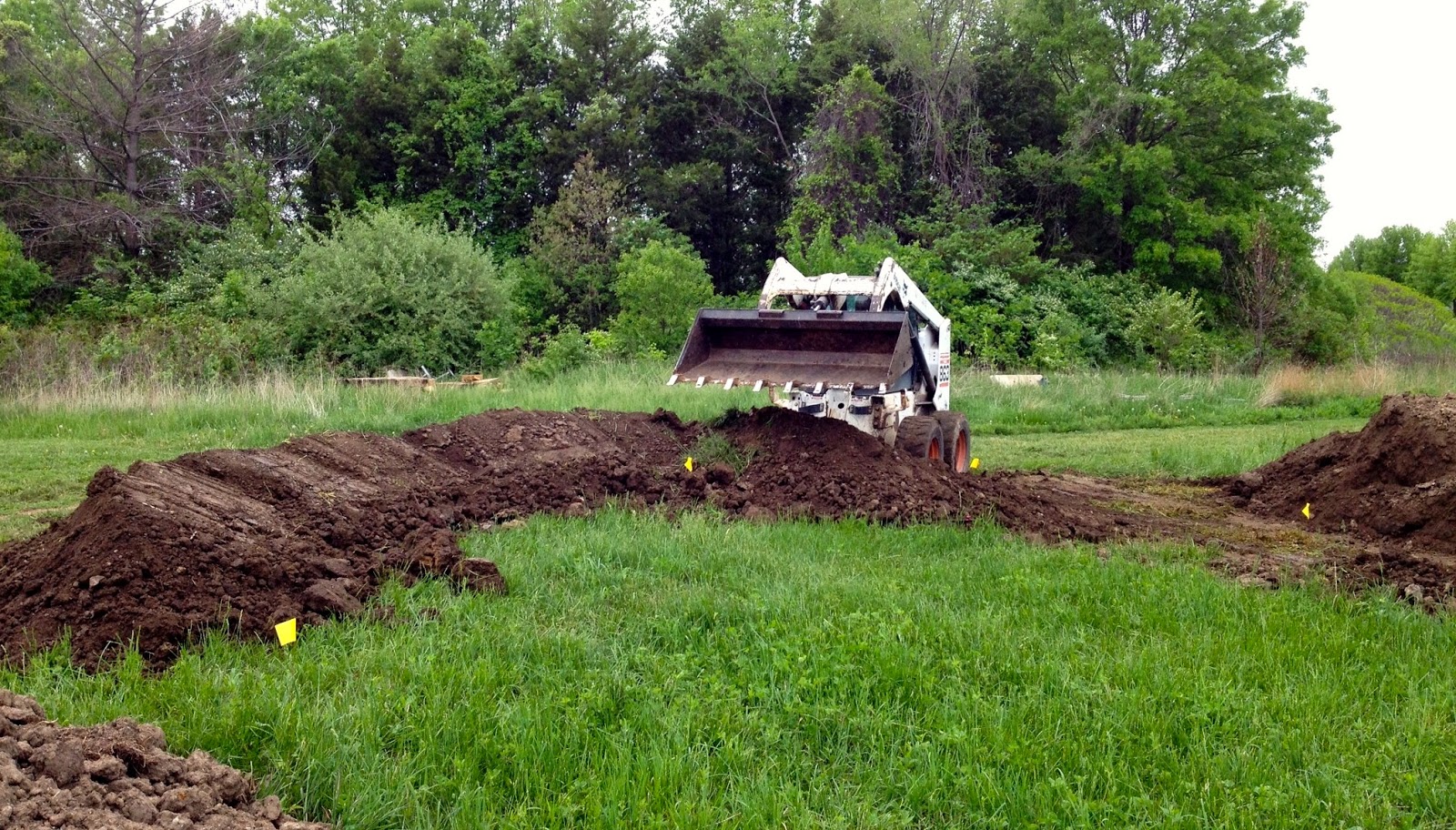 So, what do you do when some D-bag steals the signs that two 6 foot guys put up?   You get the tallest mountain biker you know and put him on a ladder to put the signs back up.

Thanks to Buzz Taylor we got the signs back up at SWW.  You will need to look up a bit to see them, they are 9-10 feet up in the trees, but they should stay there.   Unless the same D-bag wants to come out with a ladder.

On another note, Liberty Parks is putting a disc golf course in at Stocksdale.  This will have some effect on the trails, but not too much.  They will cross the trail in 3-4 places.   Generally the line of sight should minimize any chance of getting dinged by a disc.  You will see some clearing of brush for this project. 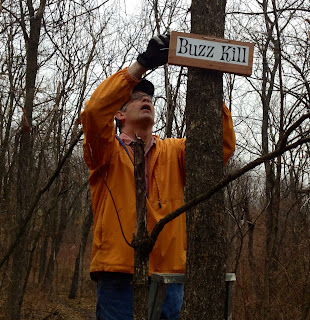 An aptly named trail.
Posted by Unknown at 9:59 AM 4 comments:

We are starting to apply some names to trail sections.  Note that I said trail sections.  We have opted to go with a larger number of names for shorter sections of trail to help with identifying where you are on the trails.   One reason for this is so that if a trail user notes an issue on the trail and contacts the trail managers we can be more specific.  For instance, someone could email us and say, "Hey, I was out running today and found a tree down across the trail on the Buzz Kill section."   That will allow us to narrow that down quickly to where we need to go do maintenance.   These names probably won't make it to the map, as it would make the map too busy.   The carsonite markers will remain on the map.

There was major progress on the skills loop today.   The work included:

A series of rock step ups (or drop downs going the other way).  These progress from just a few inches to about 22 inches in height.   There are multiple lines.  There are 3 distinct points of steps with each point having at least two different lines.  Between the second and third point there is a 18 inch drop off of a ledge as well. 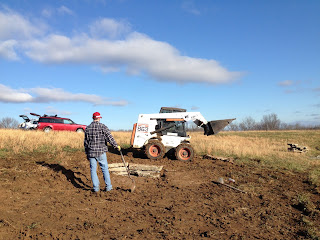 This is the second point step up. 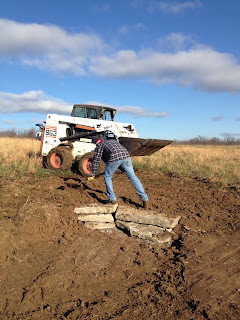 This is the second point closer up.
The third point is taller, but has 3 distinct lines. 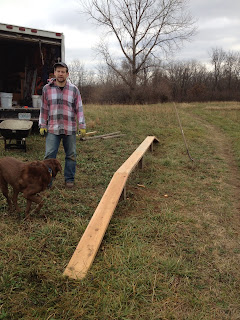 Simple, straight forward skinny with a little risk involved.
After you clear the third rock step up you have a short recovery and then come to this.

The third project for the day was somewhat unplanned.   After the bobcat work for the rock step ups, we were left with some big piles of dirt.   We built a series of dirt rollers (think large rollers on a pump track).   These occur just after the railroad ties.   The dirt rollers are on about a 12' distance apart from one another (measured from the high point on the pile).   They are of varying heights, but reach over two feet tall (close to 3 feet in some instances).

The dirt rollers will undoubtedly need some refinement, we need to see how they ride and then adjust them, but should evolve into a fun feature.   I was too tired to snap a photo.
Posted by Unknown at 12:39 PM 2 comments: 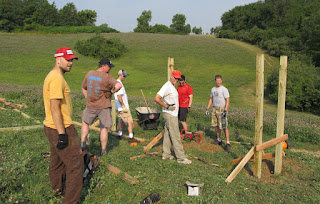 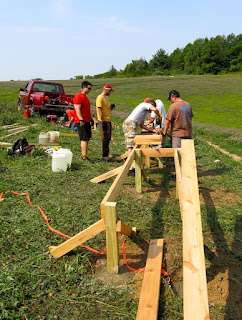 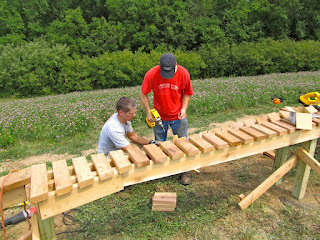 The last section gets skinny! 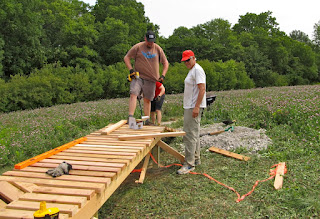 Clay and Cliff surveying the work 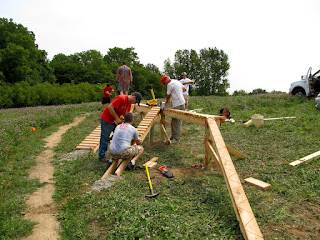 The exits going on, progressively skinnier 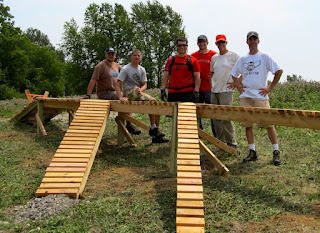 The work crew (missing Justin who had to split)
Posted by Unknown at 11:22 AM 6 comments: 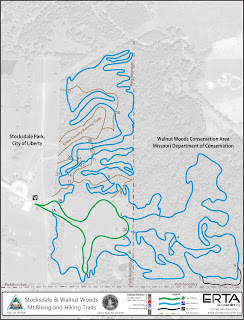 There is a significant reroute to be aware of at Stocksdale.   We will put out a new map at some point, but I will describe it here, you can reference the map to the right.


On the current map you will note at marker #5 there is a longer option and a shorter option that rejoin at marker #6.


Today we completed a project that removes the intersections at #5 and #6 (the markers have been removed).   The short route is now incorporated into the main trail.


This accomplished two goals, to lengthen the main trail and to remove the intersections.    We also remove some trail that was eroding a bit.

Yeah, it has been a while. 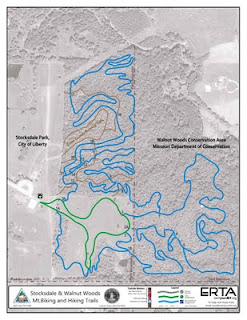 Well, I finally have gotten around to getting a new map out. This map includes the completed new loop that was an out and back last riding season. Of course, we have been done with the loop for a while, but with an injury, work and other stuff I haven't gotten around to getting the new map posted. Thanks, as always, to Neale Shour for the map work.

Note: The markers #17-21 have not been placed in the field, but we wanted to get the map done. The markers should be placed in September.

Also, watch for the field loop to be improved. We have some new equipment that will allow a uniform spraying of the field that will give a nice wide trail to prevent rutting from grass roots.

Thought I should update the blog a bit. I have been slacking on keeping this up to date.
There has been a lot of trail work getting done this fall. The weather is good and we have had a lot of people stepping up and helping out. Most of the work has been on the out-n-back trail that we didn't finish last year due to the bad winter. Here are a few photos of some of the features on this section of trail. This trail is consistent with much of SWW, twisty singletrack with some technical features. The trail will have some longer stretches of open trail with more flow before it is finished. 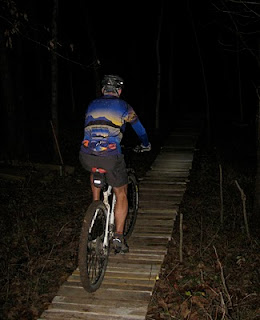 Elevated walkway over a soggy area. Thanks to Ron Bodine (pictured)
and Buzz Taylor. 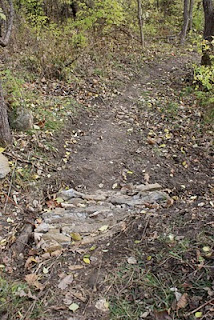 A nice example of vertical armoring, a sustainable trail practice.
Can't remember everyone that worked on this, but I know Tim King and
Clay Lozier worked pretty hard on it. Thanks guys. 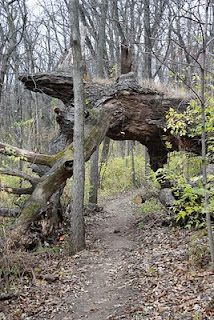 Clay's favorite tree. Easy to ride under and looks pretty cool on a night ride. 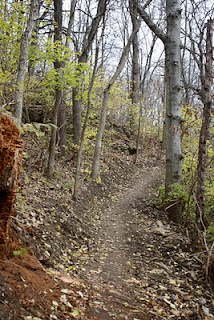 A nice stretch of benchcutting on a neat little section of trail.
Posted by Unknown at 12:53 PM 4 comments: 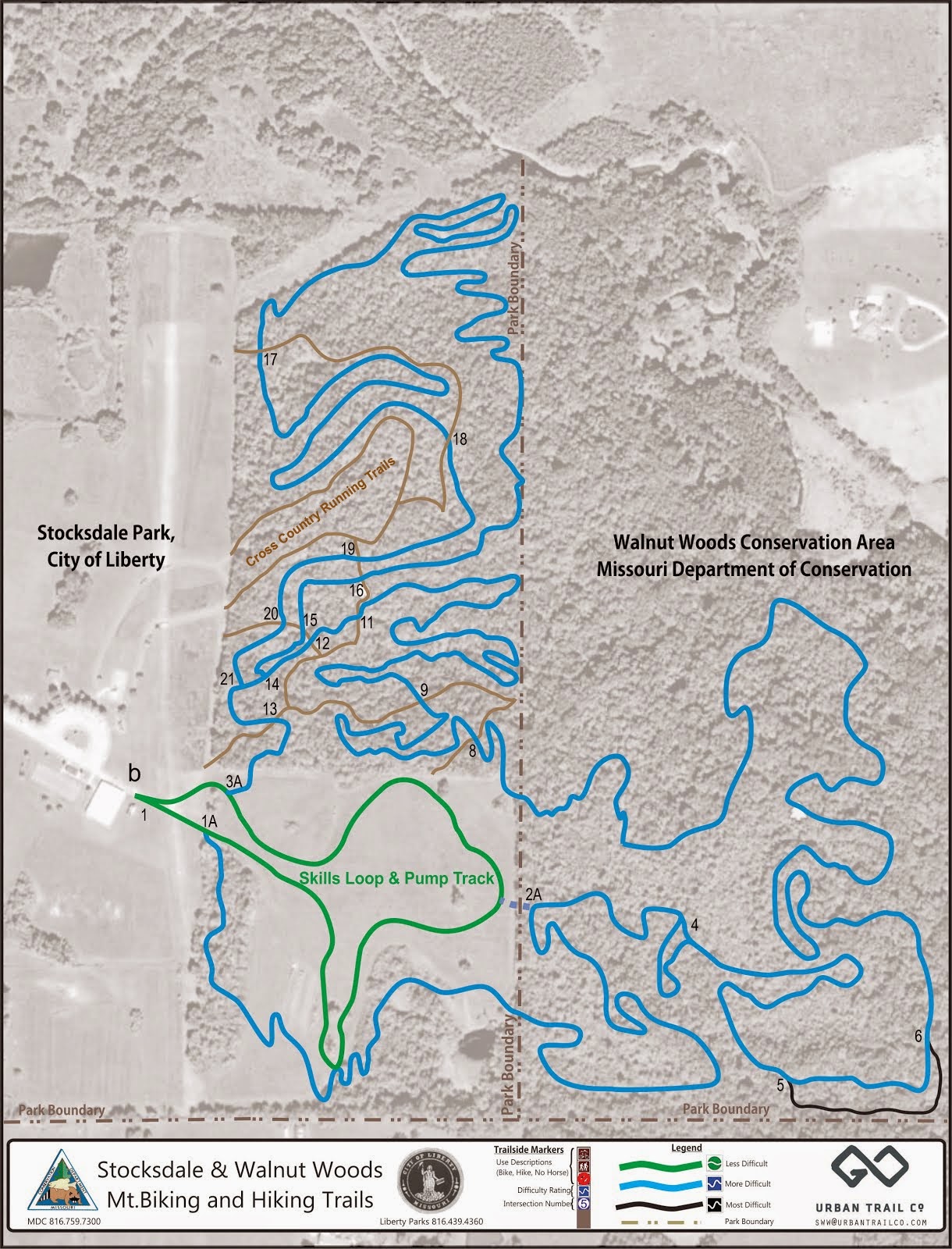 Using current estimates of cost per linear foot, the trails built by volunteers at Stocksdale/Walnut Woods represent approximately $90,000 in value added to these public lands. This is based on lower end estimates as of 04/15/11.


From I-35:  Take 152 east into Liberty.   Take this past 291 (becomes Kansas Ave.).  At the stoplight of Kansas and N. Ridge turn right and then immediately bear left at the fork.  Proceed east on what is now Sunset Ave.  As you continue east, it then becomes Mill St.   When you reach the traffic light at William Jewell College, turn right and cross the RR Tracks.  Proceed east on Richfield Road.   You will reach La Frenz road, there will be a sign for Stocksdale Park, you will turn right on La Frenz.  This road will twist around left then right before you reach the park.
From 291 South:   If coming from Lee's Summit or Independence, proceed north on 291, as you approach Liberty you will come to the first traffic light, which is Ruth Ewing Road.  Turn right on Ruth Ewing and proceed east.   It will turn north and become La Frenz road.  This will go directly to Stocksdale Park.